What is Transcreation and When Should You Use it?

Like any profession, the translation industry has its jargon. Terms like transcreation, translation, and localization make sense to professional translators but, for outsiders, they can be utterly confounding. Throw in alternative names such as creative translation or adaptation, and you have a recipe for confusion. iTi will help you identify the right service for your global campaign. Our team of linguists includes highly specialized translators, marketing-savvy transcreators, and localization experts.

In the following paragraphs, we shed light on the different services and answer common questions, including:

Let’s start with the question: What is transcreation? The definition offered by the Globalization and Localization Association (GALA) describes transcreation as “the process of adapting a creative campaign into another market with different linguistic and cultural ‘rules’ whilst still keeping the overall tone and brand approach global.”

Arguably, not only creative campaigns benefit from transcreation, but any communications that convey a brand’s identity or impact the brand image. While this mostly applies to marketing translations or cultural adaptations of advertising and promotional texts, personal branding materials – think resumés and LinkedIn profiles – should also be considered as candidates for transcreation.

Transcreation isn’t a new concept. For years, language service providers have essentially been providing this service under different names, including cross-market copywriting, creative translation, international copy adaptation, cultural adaptation, and marketing translation. However you choose to call it, the demand for transcreation has grown in recent years. This is partially due to the increased accessibility of global markets, and partially due to a rising awareness that cross-cultural marketing requires a more creative translation approach.

Transcreation vs. translation vs. localization – what’s the difference?

Think of translation, localization, and transcreation as three different tiers in the process of converting content into another language. All three aim to make content accessible for foreign target audiences. The difference lies in how nuanced the approach is.

Translation is the first and most basic tier, typically used for high-information, low-persuasion texts. This includes technical documents, medical reports, user manuals, white papers, etc. Translation conveys the information of the source text as accurately as possible in the foreign language. While translators need subject matter expertise and the ability to reproduce register and style of the original, they don’t need to take pains to get into the mindset of the target audience.

Compared to translation, localization goes a step further. Besides changing the words of the source text, it also takes the cultural context into account. Localization looks at non-verbal elements that accompany a text, such as colors, measurements, pricing, visuals, metaphors, and cultural references, to ensure the content meets the expectations of the target market. For example, a Super Bowl reference in a US ad campaign may not be effective in European countries, whereas alluding to the World Cup might make more sense in this target market. Localization also is conscious about cultural connotations that may negatively influence perception. In many Asian cultures, for instance, chrysanthemums are a symbol of nobility and power. In Italy, however, they are often associated with death – which would make them a bad choice for a global marketing campaign that includes an Italian audience.

The third and most nuanced tier is transcreation. This type of service is best for high persuasion, low information content and therefore ideal for global marketing campaigns. Rather than adapt existing content like in translation and localization, transcreation uses the source material as inspiration to create equivalent content for the target market. The degree of resemblance between source and target texts can vary greatly, as changing the language is only a small part of the equation.

A good transcreation is indistinguishable from native content. Cultural insight into the home and target market is par for the course in transcreation, as is subject matter expertise and linguistic aptitude. In addition, transcreation specialists need copywriting skills similar to those of monolingual marketing or advertising professionals. Their job is to recreate the message and emotional impact of the source in a way that appeals to the intended audience.

Looking back at the Super Bowl example above, transcreation would go even further than changing the nature of the event. Instead, it may change the theme of the campaign altogether and find a completely new way to elicit feelings of excitement and fun in the target market.

Another big difference between translation and transcreation: A transcreation project typically includes the delivery of multiple versions, particularly for taglines, headlines, and slogans. iTi’s transcreation specialists will offer alternatives wherever appropriate, along with a rationale for each suggestion. You can then choose the option you like best. When you work with iTi, you remain in charge of the creative direction of your campaign. 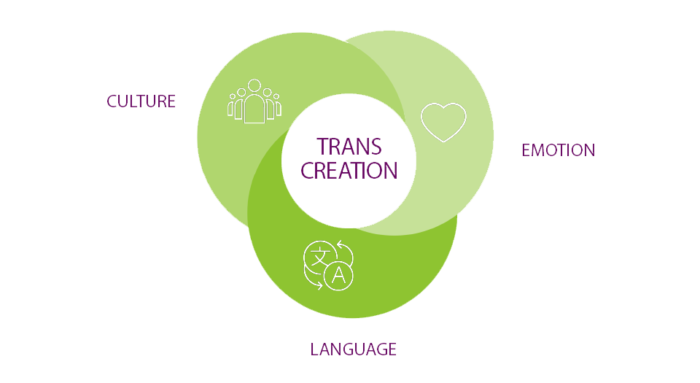 When is Transcreation the Right Choice?

Here are a few examples of content that benefits from a transcreation approach:

Let’s look at a few transcreation examples to illustrate the benefit of this approach. Take the Chinese translation of Coca-Cola. Capturing the pronunciation of Western brands in Chinese characters can be a challenge. Coca-Cola decided to adopt a slightly different pronunciation in China (ke-kou-ke-le), which can be captured with a set of graphic encodings that read, roughly, “tasty and happy” – a positive association that inherently strengthens the brand’s appeal.

Another successful transcreation example comes from the candy makers of Haribo. Their German slogan “Haribo macht Kinder froh, und Erwachsene ebenso” just doesn’t have the same ring to it in its English translation (Haribo makes children happy, and adults as well). Instead, the company chose a more creative translation approach, changing the jingle to “Kids and grownups love it so, the happy world of Haribo.” It still conveys the message of fun for young and old, but at the same time, it is equally as catchy as the German version.

On the other hand, there are examples where transcreation should have been (but alas, wasn’t) used. One such translation fail comes from the furniture makers of IKEA, who discovered that their children’s bed “Gutvik” evoked some not so child-appropriate connotations in Germany (in German, “Gutvik” sounds dangerously close to “Good f***”).

When it comes to global marketing campaigns, one tool is arguably the single most important guarantor of success: the brief. Just as monolingual copywriters use briefs as creative guidance, marketing translators require briefs to understand the underlying brand values, intentions, and expectations of their clients.

Highly creative translations take time, effort, and talent. The more information that accompanies a transcreation assignment, the better the outcome – not only in terms of quality, but also in terms of the bottom line. Providing as much information as possible up front cuts down on research, time, and ultimately, cost.

To ensure a successful transcreation project, a brief should include:

Translating marketing collateral and other brand-sensitive materials yields the best outcome whenever there is a close collaboration between the Language Service Provider (LSP) and the end client. The process is more extensive than standard translation or localization projects, but the ROI is well worth the up-front investment. After all, your brand’s image is your most important asset, and should not be placed in the wrong hands. iTi will guide you through every step of your project. Contact us to discuss how we can make your marketing materials sing on the international stage.